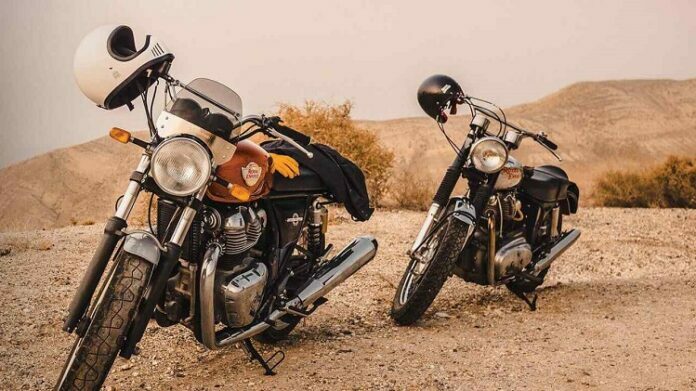 All set to mark the debut in the twin cylinder market, Royal Enfield will launch the Interceptor 650 & Continental GT 650 twins in India. Furthermore, the company has sent invites for the international launch of these bikes for 22nd-28th of September in Santa Cruz, California, with the tagline ‘It’s Playtime.’ The Indian motorcycle manufacturer Royal Enfield is anticipated to launch these bikes in India around Diwali.

Going back in dates, the Royal Enfield Interceptor 650 and Continental GT 650 motorcycles first came into limelight at the EICMA 2017 last November in the Italian city of Milan, Italy. Engine character was a primary focus while developing engine, says Royal Enfield. When they enter the market, both the motorcycles are expected to be priced very competitively, around 3-4 lakhs. Surely, these bikes will be the biggest launch from the retro motorcycles manufacturer in India this year. If the bikes are priced around the given price, they will surely give a tight competition to expensive rivals from Triumph and Harley-Davidson.

Obviously, the twin-cylinder in the motorcycles is the key highlighting feature. The fuel injected, the air/ oil cooled twin cylinder motor produces 46.3 Bhp @ 7,100rpm and 52 Nm of peak torque @ 4,000rpm. These bikes will share the newly developed 647cc, four strokes parallel twin engine. The motor is mated to a six-speed gearbox and the engine was developed at the new UK Technical Centre. The motorcycles also get a slip and assist clutch. All these features make these the most advanced engine and transmission combination which is ever built by the company. The Royal Enfield Interceptor 650 Twin is inspired from the retro design but also comes with some modifications making it perfectly suited with modernization. While the Continental GT 650 Twin is an ode to the Café Racer culture and also offers an aggressive riding position.

Both the bikes will also get disc brakes on both wheels along with dual channel ABS as standard. They also feature telescopic front forks and gas charged twin shocks at the rear. The wheelbase which is at 1400mm, ground clearance, at 174mm and length, at 2122mm is also identical to the current Continental GT with the 535cc built with single cylinder engine. Digging deep, only styling and ergonomics areas of these two bikes differ, otherwise, both are built with the same technology. Moreover, the Continental GT 650 Twin is a bit shorter than Interceptor 650 Twin. The oil-cooler for better performance and dual exhaust mufflers for true parallel twin harmony is injected in the bikes. The top speed picked up the bike which is propelled by the engine would be 160 Kph.

Classic looks with contemporary tech, the deadly combination which these bikes are going to offer will surely make some whirl in the market. Royal Enfield newswill completely spread all over soon. India’s love for retro motorcycle design is well known. And with this technology, Royal Enfiled has left no stone untied. Soon we will encounter the launch of these beauties in India.

How to Remove RTO Hypothecation